The Collins Papers owes its origins to the record creating activities of members of the Irish Republican Army (I.R.A.) and General Headquarters (G.H.Q.) staff. The paperwork held in the Collins Papers was created between 1918 and early 1922, taking in the War of Independence years (1919 – 1921) and tumultuous post Truce and Treaty period. The paperwork contains communications (despatches) between I.R.A. Brigade and Battalion Officers, (less frequently between rank and file members), and predominately those holding appointments in G.H.Q. including Michael Collins, Richard Mulcahy, Cathal Brugha and Gearoid O’Sullivan. The chief creator and recipient of most of the paperwork held in this collection was General Michael Collins. The collection, which has been in the custody of the Military Archives for decades, was named the ‘Collins Papers’ to signify that connection.

The Collins Papers totals 228 files and these files are linked to Michael Collins’ successive G.H.Q. appointments post the third Convention of the Irish Volunteers (19th November 1917). Collins held the appointment of Director of Organisation[i] initially and following that tenure, was appointed Adjutant General (a crossover with his replacement Gearoid O’Sullivan can be assumed) and finally, Director of Intelligence.  Much of the later intelligence material (post Truce and Treaty period) held in the collection can be attributed to Collins’ intelligence deputies, Frank Thornton and Liam Tobin.

The collection also contains a number of files linked to Collin’s ministerial position in the Department of Finance and as Teachta Dála (TD) for Armagh (1921-1922) in Dáil Eireann.

The survival of the collection from its point of creation, to its preservation by early custodians, is worthy of mention. It is likely the creators of the despatches and other documents did not consider that their communications would survive to be studied and analysed by future generations given the turbulent times. In fact, a number of documents held in the collection contained an instruction to ‘destroy’ or acknowledged that destruction was carried out. To be found carrying documents such as those found in the collection meant danger for both the bearer and those detailed in the communiques and destruction was a consequence of that very real fear. It is also believed that part of the collection was concealed for a number of years, post-Independence (see Archival History below).

In case of capture or interception by Crown Forces, efforts were also made to protect the identity of correspondents with most despatches showing the rank and position of the addressee and author, rather than a personal name. On occasion, initials and signatures were included and such clues can assist. It is also possible to assign authorship by using other sources such as the I.R.A. membership rolls (Military Service Pensions Collection) and individual Military Service Pension. Given the rigour that was involved in the verification of claims made for pension awards, it is a source worth consulting if the correspondents are not immediately identifiable but details of rank and position (at a certain date) are shown.

Adjutant [Michael Collins] to the Adjutant, Leitrim Brigade, 18th December 1919.  Collins wrote this in response to a cheque received that was made payable to Jenny Mason, Collins’ confidential typist.

Despatches were mainly couriered to General Headquarters (G.H.Q) from I.R.A. centres countrywide to inform G.H.Q. Directors and senior staff of local I.R.A. activities and to provide detailed reports following an operation or incident.  Reports on Brigade council meetings, elections, organisation, training, breaches of discipline and intelligence were also furnished and transmitted on an ongoing basis. The authors of these despatches, for the most part senior Officers at Brigade and Battalion level (and following reorganisation in the months before the Truce, at Division level), also informed G.H.Q. of their intelligence gathering efforts.  Communications in 1921 dealt largely with the area of code breaking and efforts to track the movements of Crown Forces or persons under suspicion.

Collins had a number of confidential typists on his staff (including Jenny Mason) and for the most part, his despatches were typed and initialled (including the typists’ initials on occasion).  The collection holds the file copy of Collins’ despatches as the top copy was sent to the intended recipient. The collection owes its existence to the keen administrative skills of Collins and his staff in creating and maintaining records and indeed the reliance Collins placed on records to coordinate, in particular, the intelligence war.

For reasons explained in the archival history section (below), documents contained in IE-MA-CP-05 and IE-MA-CP-06 (broadly relating to intelligence 1920 to early 1922 and Collins’ political activities), have only been available in the Reading room since 2016.  Not all areas of the country are represented by this surviving material.  The map shows the areas covered by intelligence files contained in IE-MA-CP-05.  It is possible that paperwork relating to the non-circled areas either did not survive or may be unaccounted for in another location.

The files generated by Michael Collins and other authors were transferred to the custody of the Military Archives, at different stages, and under different circumstances over the years.
Details behind the first transfer of “Letters and correspondence of the late General M. Collins as Adjutant General of the I.R.A. 1919-1921” can be gleaned from correspondence dating to January 1948 between Colonel Dan Bryan and Dr. R. J Hayes, then Director of the National Library[ii] on the subject of microfilming and an offer made by the NLI to microfilm the ‘Collins Papers’. Bryan reported that the papers had been in custody of a lady in Dublin, and at one time had been buried. The papers, reported Bryan, were placed in the possession of Col. Jeremiah J. O’Connell, Military Archives, “for some years”. Bryan explained why a large number of documents appeared to be in a poor state and also detailed an attempt at early restoration to prevent further damage or loss.

“Unfortunately at some time or other they were buried and suffered considerably from damp and rot. A large number have been separated and posted (sic.) on sheets of paper, but are still deteriorating. There are in addition others which had stuck together with damp and cannot be separated or deciphered with means at our disposal”

A second file transfer totaling 107 files was coordinated by the Department of an Taoiseach and the National Archives of Ireland in the early 2000s.  During a record inspection carried out by the National Archives, documents covering I.R.A. intelligence (1920 to early 1922) and Collins’ political activities were uncovered in the Department of an Taoiseach (Government buildings). The files were considered appropriate for the Military Archives to preserve considering the link to General Michael Collins and these were duly transferred. 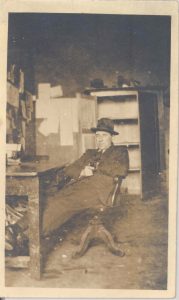 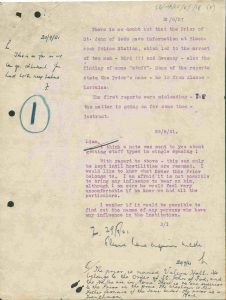 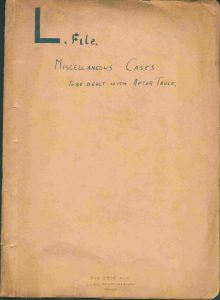 The full collection was made available in the reading room from May 2016 and digitisation completed the following year. From 2017, researchers visiting the Military Archives have accessed the digital versions of the papers and it is one of the most accessed collections in the reading room given the range of material and its distinct provenance.

The papers have been available since September 2019 in digital format on www.militaryarchives.ie . The catalogue, which has been adapted to create searchable fields and to provide an easy click to download facility, is rich in detail and a concentrated effort was made by cataloguers to include mention of places, people and incidents (ambushes, operations) so relevant material can be upturned with relative ease.  It is also possible for users to enter a reference code (if they have seen a code in a publication or treatise) and again, find what they are looking for. The advent of the Collins Papers online presents new opportunities for a global audience to analyse the years preceding and encompassing the War of Independence and the post Truce and Treaty period, using the records created by I.R.A. leaders and General Headquarters staff.   The digitisation of the Collins Papers also supports the ongoing effort of the Military Archives to safeguard and preserve this significant collection.